We posted an excerpt from Adam Feldman’s excellent Jabberwockyesque panning of Broadway’s Wonderland a few weeks ago. This week, it’s Coleridge being echoed to criticize a new production called The Trial of the Mariner at Hoxton Hall in London: 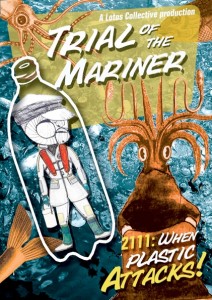 It is The Trial of the Mariner,
And it occurs at Hoxton Hall,
A curious tale, told at full sail,
About the threat of plastic sprawl.

The Ship of Fools is rubbish too,
Volunteers and Lotos Collective made it from trash.
It navigates around the audience,
Beware: you and the crew might clash.

Because this is interactive theatre!
Accept bananas, make thunder, stay on your feet;
This isn’t for you, if you prefer to do
Theatre with an interval, three acts and red velvet seat.

The play actually seems very intriguing, maybe it just wasn’t that reviewer’s clean cup of tea. The Trial of the Mariner is “an interactive, multimedia performance looking at the future of our oceans” inspired by both The Hunting of the Snark and S.T. Coleridge’s “The Rime of the Ancient Mariner.” “The year is 2111, and a group of desperate sailors embark on a voyage on the Ship of Fools. Lost at sea and mad with cabin fever, they arrive at the Plastic Continent of the Pacific Ocean Gyre, where the unhinged Mariner’s adventures come to life.” There’s still three more performances, closing on the 21st.