Check out the summer 2011 Threepenny Review, out of Berkeley, California. There is an article by Argentinian author Alberto Manguel called “Return to Wonderland,” which is also online as a sample of the issue. Manguel is an expert on wonderous lands, having co-writen The Dictionary of Imaginary Places (1980), as well as The Library at Night (2007) and A History of Reading (1996). His essay is full of reverence for the history and literary excellence of the Alice books: 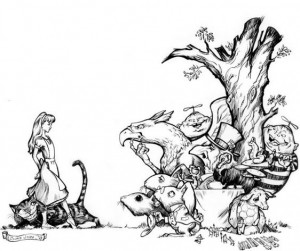 The Reverend Duckworth recalled the excursion precisely: “I rowedstroke and he rowed bow in the famous Long Vacation voyage to Godstow, when the three Miss Liddells were our passengers, and the story was actually composed and spoken over my shoulder for the benefit of Alice Liddell, who was acting as ‘cox’ of our gig. I remember turning round and saying, ‘Dodgson, is this an extempore romance of yours?’ And he replied, ‘Yes, I’m inventing as we go along.’”

Inventing Alice’s adventures “as we go along”: the truth is unbelievable. That Alice’s fall and explorations, her encounters and her discoveries, the syllogisms and puns and wise jokes, should, in all their fantastic and coherent development, have been made up then and there, in the telling, seems almost impossible. Osip Mandelstam, commenting on the composition of Dante’s Commedia (another dreamlike journey of exploration), says that it is naive of readers to believe that the text they have in front of them was born full-fledged from the poet’s brow, without a long mess of drafts and trials in its wake. No literary composition, says Mandelstam, is the fruit of an instant of inspiration: it is an arduous process of trial and error, helped along by experienced craft. But in the case of Alice we know it wasn’t so: precisely such an impossibility seems to have been the case. No doubt Carroll, in the back of his mind, had previously composed many of the jokes and puns that pepper the story, since he loved puzzles and word games, and spent much of his time inventing them for his pleasure and that of his child friends. But a bagful of tricks is not enough to explain the strict logic and joyful avatars that govern the perfectly rounded plot.

The Threepenny Review can be ordered here.