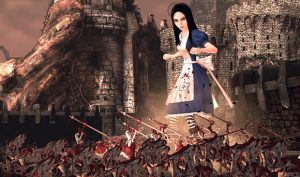 On June 14, Electronic Arts will release American McGee’s Alice: Madness Returns, the sequel to the 2000 computer game American McGee’s Alice. The new game will run on PlayStation 3 and Xbox 360 as well as PC. Judging from one of the trailers, the graphics are luscious and the scenarios violent. A dark-haired adult Alice at a psychotic tea party rams a knife through the giant eye of a cycloptic monster. Blood splatters on her face – and, scene!

There’s a nice article interviewing American McGee at news.com.au here. American McGee is his real name; he is the legendary game designer famous for Doom and Quake.

“I can remember the copy of the book that I had,” he said of the classic he read many times as a child, and many more as an adult.

“The size and the feel of it. I know it made an impression on me as a child.

“I think Humpty Dumpty (from Through the Looking Glass) had a pretty significant impact on me. It was a pretty dark piece of the story — this character shattering and breaking.”