When I first saw this article about Alice in Sunderland, I thought it might be a forgotten manuscript republished by Michael Everson of Evertype, who has recently released such lost gems as “Clara in Blunderland: A political parody based on Lewis Carroll’s Wonderland” and “Lost in Blunderland: The further adventures of Clara: A political parody based on Lewis Carroll’s Wonderland,” as part of Evertype’s boundless library of Wonderland translations and variations. However Alice in Sunderland was just a Fake News release from NewsBiscuit, a website with the tag line “The news before it happens…” 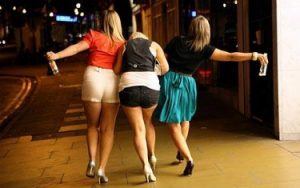 An academic at the University of Lancaster has uncovered a previously unheard of follow-up to Lewis Carroll’s acclaimed Alice series of children’s novels, this time set in the North East of England.

‘Alice in Sunderland is very much like the original novels,’ said Professor Terry Eagleton. ‘It might be grittier and racier, but it contains the same trademark cast of unbelievable characters performing inexplicably bizarre pastimes. I don’t think I’d be spoiling the ending for the readers to say that the things they will witness in these pages could only have happened in a dream.’

As with Carroll’s first novel, ‘Alice’s Adventures in Wonderland’, the action begins with the young heroine lazing by a river one summer afternoon. ‘Only this time Alice is a teenager and she’s spread-eagled on a bench beside the River Wear, her soporific state explained by the two dozen empty bottles of WKD and vodka whose DRINK ME labels she had no choice but to obey.’ […]

The article ends with Professor Eagleton “continuing his search for the rumoured sequel to Alice Through the Looking Glass describing a hen weekend in Gateshead.”

If your English geography is hazy, Sunderland is a small coastal city within Tyne and Wear in North East England, and the NewsBiscuit article should give you a taste of some of the local color.  However, it’s not without its real Carroll connections, and NewsBiscuit is not the first to make the joke. This is a paragraph from the Wikipedia article on Sunderland:

Lewis Carroll was a frequent visitor to the area. He wrote most of Jabberwocky at Whitburn as well as “The Walrus and the Carpenter”. Some parts of the area are also widely believed to be the inspiration for his Alice in Wonderland stories, such as Hylton Castle and Backhouse Park. There is a statue to Carroll in Whitburn library. Lewis Carroll was also a visitor to the Rectory of Holy Trinity Church, Southwick; then a township independent of Sunderland. Carroll’s connection with Sunderland, and the area’s history, is documented in Bryan Talbot’s 2007 graphic novel Alice in Sunderland. More recently, Sunderland-born Terry Deary, writer of the series of Horrible Histories books, has achieved fame and success, and many others such as thriller writer Sheila Quigley, are following his lead.

Bryan Talbot’s Alice in Sunderland is on amazon.com here. Wikipedia’s sited reference for the claim that Carroll wrote “The Walrus and the Carpenter” at Sunderland is the website englandsnortheast.co.uk, at which I found written:

On the coast to the north of Sunderland towards South Shields is the village of Whitburn and the nearby Whitburn Sands, where Lewis Carroll is said to have written the eighteen verse poem called the `Walrus and the Carpenter’.

The Walrus and the Carpenter
Walked on a mile or so,
And then they rested on a rock
Conveniently low:
And all the little oysters stood
And waited in a row.

“The time has come;” the walrus said
“To talk of many things:
Of shoes and ships and sealing wax
Of cabbages and kings
And why the sea is boiling hot
And whether pigs have wings.”

The Sunderland and Shields area does seem a likely setting for the poem as in Carroll’s time Sunderland was a great shipbuilding port employing many carpenters. Boiling hot sea could be a reference to the steam-boat colliers in the area and a stuffed walrus in a Sunderland museum may have provided further inspiration. It is known that during his regular visits to Whitburn where he had a number of relatives, Lewis Carroll and company entertained themselves with evenings composing rhyme and song. Carroll’s nephew, Stuart Dodgson Collingwood, informs us that all but the first verse of the `Jabberwocky’ poem were written by Lewis Carroll at Whitburn. The first verse was written at Croft on Tees, near Darlington, where Carroll lived as a boy.

3 thoughts on “Alice in Sunderland”