You might have noticed the above photo in the The New Yorker Magazine, April 11th, as the large image starting the Goings On About Town section. The picture was taken by Julieta Cervantes, a shot from New York Theatre Ballet’s Alice-in-Wonderland Follies, which ran April 8-9 at Florence Gould Hall.  The New Yorker’s listing included a short review on pg. 11 which mentioned the recent plague of Alice ballets:

Alice is all the rage these days; just last month, both the Royal Ballet in London and the Royal Winnipeg Ballet put on major new productions. New York Theatre Ballet’s staging may not be the most lavish or the most recent (it was created in 2001), but it is not without its charms. Conceived as a ballet for children, it tells the story in a vaudeville style, with a touch of soft-shoe, a soupçon of burlesque, and a just smattering of dancing on pointe—by Alice, of course. The production is witty, clever, and blessedly brief. Gillian Bradshaw-Smith’s set designs were inspired by New York’s Palace Theatre, circa 1913, and the costumes, by Sylvia Nolan (Metropolitan Opera), are imaginative and lovely.

What New Yorker Magazine would be complete without the word ‘soupçon?’ Their blog Photo Booth includes four more of Cervantes’ lovely photos from the Follies, including these two: 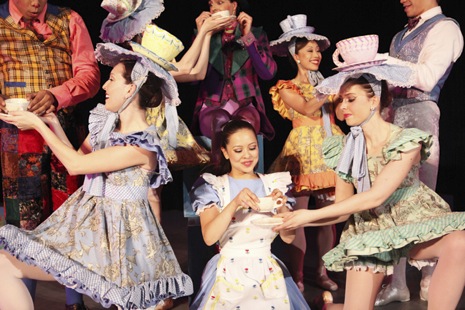