Lewis Carroll and the Liddell family made the July 26th 2010 issue of the New Yorker in reference to his work on election mathematics. Anthony Gottlieb, in his article in the book review department called “Win or Lose: No voting system is flawless. But some are less democratic than others”, gives Dodgson praise for considering voting systems that are more fair than, for instance, the U.S.’s current winner-take-all method. 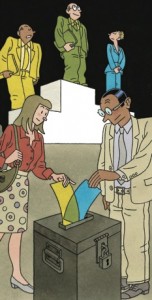 The history of voting math comes mainly in two chunks: the period of the French Revolution, when some members of France’s Academy of Sciences tried to deduce a rational way of conducting elections, and the nineteen-fifties onward, when economists and game theorists set out to show that this was impossible. Perched in the middle is the Reverend Charles Dodgson, better known as Lewis Carroll, the author of “Alice’s Adventures in Wonderland” and “Through the Looking-Glass.”

National politics weren’t on Dodgson’s mind, it appears, when he first became interested in the theory of voting, in the early eighteen-seventies. Ostensibly, he was pondering the best way for the governing body of Christ Church, Oxford, where he was a tutor in mathematics, to decide on the design for a controversial belfry, and to pick new members of the college. As to what explained his sudden interest in college politics, some people—notably the late economist and Dodgson scholar Duncan Black—have suggested that Alice Liddell, who inspired the Wonderland tale, in 1862, was at the bottom of it. Alice’s father, the head of Christ Church, had forbidden Dodgson further contact with his daughters, and meddling in college politics may have been Dodgson’s way of getting back at him.

The whole article is pretty interesting, and concludes that one of the fairest methods of voting might be similar to how people regularly rank favorites on internet sites like Yelp (“Approval Voting”).