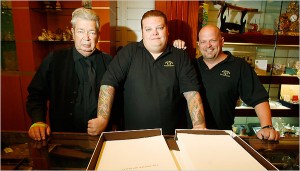 Shelby Tashlin of Las Vegas walked to the counter clutching a boxed edition of “Alice in Wonderland” containing an etching and 12 lithographs by Salvador Dalí. Ms. Tashlin’s opening thrust: the Dali prints were limited in number. Mr. Harrison’s parry: “He’s pretty well known for fudging numbers.” Mr. Harrison spoke about etching versus lithography and allowed that Dalí and Lewis Carroll were a “wonderful combination.” Then it was time for business. Ms. Tashlin wanted $10,000. Mr. Harrison asked if she had taken a little blue pill, and offered $5,000.

She politely declined and walked away still clutching “Alice in Wonderland.” “I was hoping it would go the other way, but I’m not surprised,” she would tell a reporter later.