In yesterday’s Summer TV round-up PART ONE, the evil ghost of Alice Liddell came back through the looking-glass in Syfy’s Warehouse 13. The characters in the show needed to use enchanted artifacts, such as the caterpillar’s hookah, to conquer the demon. Alice-related artifacts were also on a very different show this May, namely, Antiques Roadshow.

The popular PBS show featured some lovely Alice in Wonderland carved door stops, appraised at $10,000-$15,000. The appraiser, Noel Barrett, said, “Alice in Wonderland is so much a part of our culture. And this imagery is just ingrained. And what to me is really exciting is, in carved wood, whoever created these did a masterful job of adding dimension to the wonderful Tenniel illustrations, which of course are touchstone imagery of Alice.” The guest originally paid $100 for them at an estate sale. More pictures and a transcription of the appraisal are here.

Last week, a show called Face Off, also on Syfy, had an episode called “Alice in Zombieland.” Face Off is a stage make-up competition, sort of like Iron Chef but with the contestants making monster masks.  In this episode, “the contestants find themselves in the gorgeous Descanso Gardens where McKenzie tells them that the challenge this week is a mash-up between Alice in Wonderland and zombies. Some artists are psyched, but Sarah, who grew up in a Mennonite community, is stumped. At a loss for how to turn the Cheshire Cat into a zombie, she consults Nicole, who tells her to just mash it up.” This episode can also be watched online in HD on Amazon Instant Video for $1.99.

There pictures below were taken from FearNET TV, where there is a detailed review of the episode.

And now a look into the future of Alice television!

On the CW network, look for a cop drama based on Alice in Wonderland. You read that correctly. “Alice will be a modern-day big city detective,” reports Entertainment Weekly. “In this version, Alice discovers a fantastical world beneath Los Angeles. The working title is Wunderland (yes,with a ‘u’).” EW concludes, “What could go wrong?” 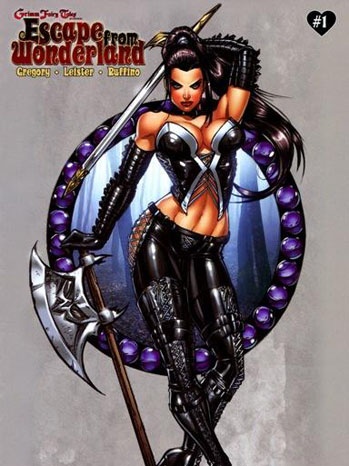 And finally, big news from Comic-Con. Last year we joked about the fact that the prequel to Zenoscope’s “Return to Wonderland” was called “Alice in Wonderland.” Indeed, the books have been among the top ten independent comics of the past few years. Now, the news from Comic-Con is that the television rights for the whole Zenoscope series were won by Lionsgate, apparently following a “six-studio bidding war.” Look for Alice Liddell’s busty ass-kicking daughter to enter a mad Wonderland on a major network sometime in the next few years. The entire series of Zenoscope novels are available at Amazon and where all fine comics are sold.