When we first meet the Duchess in Chapter VI of The Annotated Alice, Martin Gardner’s footnote (on page 82) is this:

A glance at the portrait of the Ugly Duchess, by the sixteenth-century Flemish painter Quintin Matsys (it is reproduced in Langford Reed’s book on Carroll) leaves little doubt that it served as the model for Tenniel’s duchess. Matsys’s duchess is popularly supposed to be Margaretha Maultasch, a fourteenth-century duchess of Carinthia and Tyrol. “Maultasch,” meaning “pocket-mouth,” was a name given to her because of the shape of her mouth. The unhappy life of poor Margaret, who had the reputation of being the ugliest woman in history, is told by Lion Feuchtwanger in his novel The Ugly Duchess. (See “A Portrait of the Ugliest Princess in History,” by W. A. Baillie-Grohman, Burlington Magazine, April 1921). 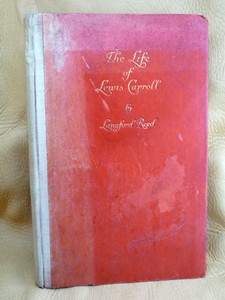 Classic Gardner, in that is fascinating, imformative, but slightly dated, as it references a bunch of books and articles that are difficult to find in the 21st Century. The Life of Lewis Carroll by Langford Reed was published in 1932, and rarely or never afterwards. A few used copies turn up on Amazon for as cheap as $19.50. (The picture to the left is from an eBay copy listed for $14.99. A scanned copy is on Google Books, but the full text is currently restricted.) If one wanted to see Matsys’ painting, and can’t make it today to the National Gallery in London where it hangs, it’s still a quasi-famous if not iconic image and there are copies all over the internet. Recent research about the painting, as reported by the Guardian in 2008, solved a few old mysteries: “firstly, the portrait is truthful and she almost certainly looked like that, and secondly, a long held historical theory that the painter was copying Leonardo da Vinci is wrong. The medical research shows that she was suffering from an advanced form of Paget’s disease – osteitis deformans – which enlarged her jaw bones, extended her upper lip and pushed up her nose. It also affected her hands, eye sockets, forehead, chin and collarbones.” Gardner says there is “little doubt” that the Matsys image inspired Tenniel, and I presume he can state that without a reference because the portrait was famous enough, and his illustration evocative of it enough, to be obvious. (The nose, the headdress, the “pocket-mouth.”)

The Google Art Project has a very high quality image of the painting here. You can zoom in close and see every crack in her décolletage. (If you’re unfamiliar with the Google Art Project, it lets you wander around famous museums all over the world, virtually wander from room to room, and then study paintings in spectacular detail.)

Margaret, Countess of Tyrol, better known as Margarete Maultasch (1318 – 3 October 1369) has a Wikipedia page here. Of her posterity, it’s written: “Though contemporaries such as the chronicler John of Winterthur called her beautiful, the nickname Maultasch led to the widespread notion of a woman with deformed features. Quentin Matsys’s 1513 portrait The Ugly Duchess, after a sanguine by Leonardo da Vinci, may refer to Margaret, and it was Sir John Tenniel’s model for the ‘Duchess’ in his illustrations of Lewis Carroll’s Alice’s Adventures in Wonderland.

Lion Feuchtwanger utilized her story in his novel The Ugly Duchess and in 1816 Jacob Grimm collected the ‘Legends of Margarete’ in his book German sagas.” Did you catch that? The original Margaret may actually have been “beautiful,” and it was centuries of folklore that created the figure of the Ugly Duchess. And then centuries later, people began to associate her with the painting of “An Old Woman.”

As for Feuchtwanger’s 1923 historical novel, Die häßliche Herzogin Margarete Maultasch (The Ugly Duchess), also recommended in Gardner’s footnote, it also appears to be out of print. First Editions in German go on Amazon for over a hundred dollars, but used copies of later editions can be found for $11. Used copies of Willa Muir and Edwin Muir’s translation into English, also out of print, can be found for pretty cheap. The text for the Feuchtwanger is also on Google Books in German and English, but it’s also currently restricted.

But just as we were beginning to get discouraged that none of the books Gardner referenced could still be found easily, Whala! “A Portrait of the Ugliest Princess in History,” by W. A. Baillie-Grohman, in Burlington Magazine’s April 1921 issue, can be found on the Internet Archive here! Thank you, Brewster Kahle.

(‘Y’s sometimes look like ‘v’s when text is scanned in, et cetera.) Subscribers to the Burlington Magazine can still read back issues online, but I’m not sure if that goes all the way back to 1921. (If the quote from the Internet Archive above can be believed, the article might be from January 1921, not April.)

This is the first blog post in a series I call “G.A.H.! (Gardner’s Annotations Hyperlinked),” named after the exclamation (“GAH!”) we sometimes speak softly when a footnote references a book that is increasingly difficult to put your greasy paws onto. The Annotated Alice is still the definitive edition of Lewis Carroll’s masterpiece, but sometimes it needs some links.