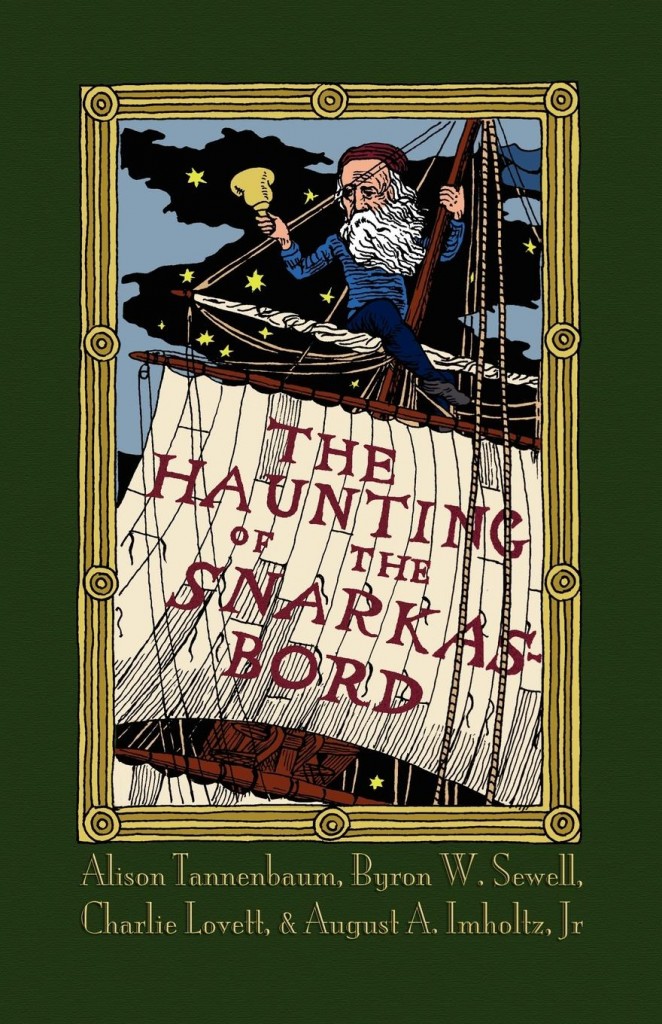 The Lewis Carroll Society of North America’s fantastic Spring 2012 meeting yesterday in Cambridge, Mass., was followed today by a gathering to view the Lewis Carroll collection of former president Alan Tannenbaum and his wife Alison Tannenbaum, at their beautiful house in Chelmsford, Massachusetts. Sandwiches were served, containing what I hope now was beef and turkey meats. In attendance were three of the four authors of this strange new sequel to The Hunting of the Snark, titled The Haunting of the Snarkasbord: Alison Tannenbaum, Charlie Lovett, and August A. Imholtz, Jr. Not physically present was illustrator Byron W. Sewell. It is published, of course, by Evertype’s Michael Everson, a man who would publish Alice’s Adventures in Wonderland translated into Dothraki (a fictional language created for HBO’s A Game of Thrones, based on the novels of George R. R. Martin) if he could. (Yes, that was an attempt to inspire aspiring Dothraki translators out there.) Everson writes:

Sometimes a publisher is given a gift for his unbirthday. Not long ago, four noted Carrollians came to me with a proposal for a dark, humorous parody of The Hunting of the Snark concerning what followed the Baker’s vanishing and the Crew’s continued hunt for a snark on Snark Island. How could one refuse?

Alison Tannenbaum wrote the poetry in Snarkasbord: A Crewsome Choice and also wrote notes on Byron W. Sewell’s illustrations for it. An introduction and Gardnerian-style notes have been written by August A. Imholtz, Jr in his inimitable style.

This edition marks the first public publication of the poems “The Booking”, “The Recrewting”, and “The Sailing”—the three “Missing Fits” composed by Charlie Lovett. These were originally written for a secret English Snarkian Society, and were mentioned by Selwyn Goodacre in his “The Listing of the Snark” in Martin Gardner’s final version of The Annotated Hunting of the Snark. Hitherto, they have only ever been seen by the members or guests of the Society.

In addition to his wonderful illustrations, Byron W. Sewell has contributed an original short story, “Forks and Soap”, which tells what happened to the Baker from the viewpoint of the Boojum. Like Lovett’s parodies, this short story has never before been seen by the public; it was issued in a very limited number to his Carrollian friends.

Tannenbaum is herself a notorious Cook (although she is known to use too much pepper) and she and Imholtz created the cookbook Alice Eats Wonderland published in 2009. Since the Snarkasbord poem seems to have a bit of Donner Party in it, let’s hope a sequel to Alice Eats Wonderland does not cater to the tastes of the Cannibal Club (with whom Lewis Carroll dined on 21 January 1868 and described in his diary as a “heinous society led by the reprobate [Sir Richard] Burton.” (Thank you, August, for the entertaining introduction.) The Haunting of the Snarkasbord sells for $15.95 at Evertype.