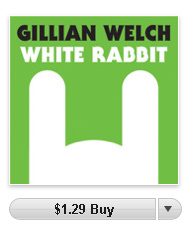 The great country revival duo, Gillian Welch (with Dave Rawlings), released their first album in almost a decade, The Harrow & the Harvest. (It’s really good.) They went on Fresh Air with Terry Gross to schlep it, and at the end of the show, Gross asked them to play a cover, “to surprise us with a song that we might not think that they like.” They chose Jefferson Airplane’s “White Rabbit,” and it’s a pretty damned beautiful cover of that song. Starting at 41 minutes into the show, Welch explains why they chose that song, and then their version of it gets cut off for the credits. HOWEVER, naturally, they’re hawking it as a special single on iTunes, for $1.29. Remember what the dormouse said… “That I can’t remember,” said the Hatter.