Clare Imholtz reports, with a mini review for a mini book: 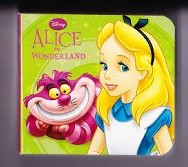 Dalmation Press has published a new Disney Alice in Wonderland for children aged 2–4, perhaps, as Dodgson wished for his Nursery Alice, “to be thumbed, to be cooed over,to be dogs’-eared, to be rumpled, to be kissed, by the illiterate, ungrammatical, dimpled Darlings that fill your Nursery with merry uproar…”

This teeny abridged version is a board book about 2.5 by 3 inches and just ten thick pages long. Five pages of text face five pages of illustration. The book reads in toto:

p. 1 Alice follows the White Rabbit into a strange world.
p. 3 She meets twins named Tweedledee and Tweedledum.
p. 5 The Mad Hatter and March Hare have a tea party.
p. 7 Alice meets the Queen of Hearts.
p. 9 Was it all just a dream?

Well, what do you expect for $1.00! This may be available at your local Target.

We know of another 6-inch-tall Alice. In August 2010, we posted “New Media Artist” Jason Huff’s Auto-summarized version of Through the Looking Glass, from his book AutoSummarize, for sale here. For this project, he ran famous books of literature through Microsoft Word’s AutoSummarize feature. His TTLG is only 20 words long, and here’s one of his several AAIW, for comparison to the Dalmation book:

Alice thought to herself.