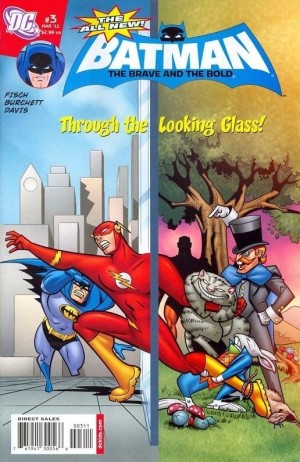 Here’s the cover for Issue #3 of the new comic series The All-New Batman: The Brave and the Bold, which was launched after the success of the Cartoon Network show Batman: The Brave and the Bold. Bob Kass writes to us: “The cover shows the Alice in Wonderland characters but the story has the Looking Glass characters. In the story, the Mirror Master, who is a classic Flash villain, sends Batman and the Flash to the Looking Glass World with the help of Mad Hatter. The story includes the White Knight, the Tweedles, Jabbewock, Humpty Dumpty, etc. There is a clever touch where the Flash’s costume insignia reverses in the Looking Glass world.”

Johanna Draper Carlson at Comics Worth Reading is happy that this issue “take[s] on some of the whimsy and charm that make its cartoon counterpart so much fun to watch.”

Issue #3, for example, takes the trendy inspiration of Alice in Wonderland to remind us of the Batman villain The Mad Hatter, who’s mind-controlling the original Flash because “he’s one of the few heroes with the good taste to wear a hat.” That kind of logic, internally consistent to the characters but ridiculously silly to the reader, adds to the enjoyment of this comic.

Batman’s most famous enemy The Joker has been identified with Carroll’s character before (recently in The Joker’s Asylum II, June 16th, 2010.) But apparently The Mad Hatter is himself also a Batman villain, originally appearing in Batman #49 in October 1948 (according to the Wikipedia.) “Like other Batman villains, the Mad Hatter has become a darker character over the years. The Mad Hatter is depicted as a scientist who invents and uses technological mind-controlling devices to influence and manipulate the minds of his victims, believing that ‘the mind is the weakest part of a person’. He is well-known for sporting a green-coloured hat which is usually slightly over-sized as it houses his mobile mind-manipulating devices.” So that’s why the Hatter wears a big hat!