Simon Winchester, author of the excellent book The Professor and the Madman: A Tale of Murder, Insanity, and the Making of the Oxford English Dictionary, is back with a book about Lewis Carroll and the Liddell family called The Alice Behind Wonderland. The new book uses Carroll’s famous 1958 photograph of Alice as a beggar-girl as a launching point for the discussion. Former director of New York’s Morgan Museum and Library, Charles E. Piece, Jr., reviewed it in the Wall Street Journal a few days ago: 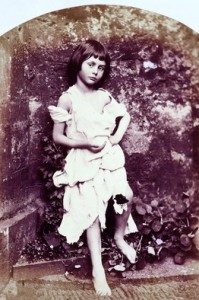 To my surprise, Mr. Winchester does not appear much interested in the influence that Alice Liddell might have had on Dodgson’s creation of the heroine of “Alice’s Adventures in Wonderland” and, six years later, “Through the Looking-Glass.” He simply relates the well-known story of how Dodgson took the Liddell girls on a picnic on July 4, 1862, during which he told them the tale of a little girl who had fallen down a rabbit hole. Alice, captivated by the tale, made Dodgson promise to write the story down and give it to her as a gift. In November 1864, he fulfilled that promise.

Mr. Winchester instead focuses on the odd estrangement between the Liddell family and Dodgson in the late 1860s, a breach that has remained largely unexplained. The most dramatic fact is that Dodgson and Liddell never saw each other again after he took the 18-year-old’s photograph in 1870.

The rest of that review is here. Simon Winchester’s The Alice Behind Wonderland was released March 17th with a hardcover price of $16.95.