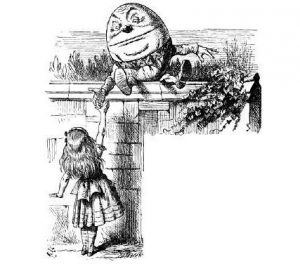 I wasn’t expecting postmodern philosophy when I opened the New York Times Opinionator blog this week, but there was filmmaker Errol Morris rambling on about truth, relativity, Jorge Luis Borges and Humpty Dumpty. It appears to be the fourth of a five-part series called “The Ashtray,” no doubt what he was staring into when he starting questioning existence and art. Part Four, “The Author of the Quixote,” is named after Borges’ story about Pierre Menard, a 20th century Frenchman who wrote a book called “Don Quixote,” which has the identical text to Cervantes’ book of the same name. Borges’ book review of it complains that Menard’s 17th Century Spanish seems affected, unlike Cervantes. Read the whole Morris essay here, which drags in a long quote from Through the Looking Glass. “…It addresses the issue: can words mean anything we want them to?” asks Morris. “Humpty-Dumpty is suggesting an ‘authoritarian’ theory of meaning. Words mean whatever I want them to mean. It is easy to see it as an earlier version of ‘The Ashtray Argument.’”