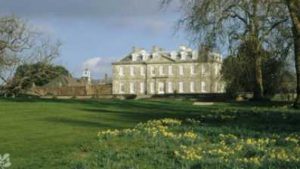 FoxNews.com reports that Antony House, in Plymouth, UK, has seen a “huge increase in visitors” since Tim Burton’s Alice in Wonderland movie was released in March 2010.  The mansion (pictured above) was used in filming the non-Underland parts of the film.

Antony House, near Plymouth in southern England, was lucky to attract more than 20,000 visitors a year before director Tim Burton chose the mansion as the setting for his adaptation of Lewis Carroll’s famous fantasy adventure.
Since “Alice in Wonderland” was released last year, more than 100,000 people have traveled to the quiet location that was previously most famous for its displays of flowers.
Emma Quan, of UK charity The National Trust, said that 2,000 people turned up on a single day during the Easter vacation.
“For us, 600 [people] is a very busy day. We had to have people at the top of the drive turning visitors away,” she said.

If Antony House wants to continue to capitalize on this windfall, they might want to fledge out their Carrollnalia. May we recommend adding some Live Flowers to their gardens?