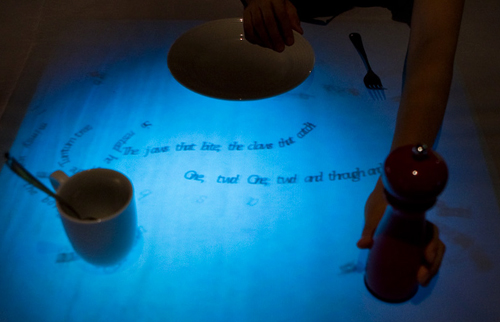 Thanks to the blog Moving Poems: The Best Video Poetry on the Web for rediscovering this Vimeo video of Hye Yeon Nam’s installation Dinner Party. I assume the video was taken at the Eyebeam exhibition in New York, 2008, and according to her website, Dinner Party was last sponsored in July 2010 by the not-at-all-Kafka-esque-sounding Ministry of Knowledge Economy and Korean Institute of Design Promotion. She is a Ph.D. candidate at the Georgia Institute of Technology. 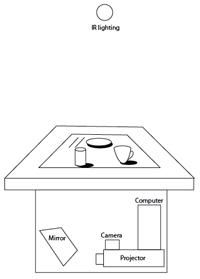 Dinner party provides a space where people meet and interact with Lewis Carroll’s poem, Jabberwocky, inspired creatures hiding in the shadows.
At first glance, the single chair and place set for one, seemingly provides a solitary dinner; rather the interaction offers a communication between oneself and the imaginary creatures. Initially gathered under the shadow cast by the plate, disturbed creatures will nervously scatter attempting to go around any other shadow cast on the table. A period of quiet status will encourage the creatures to reveal themselves.