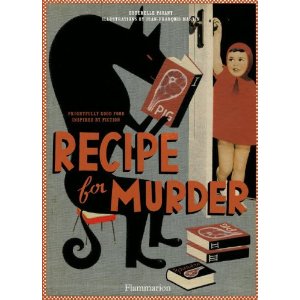 Wondering what to serve at your Halloween dinner party? How about Patrick Bateman’s roast beef with truffled mashed potatoes, followed by Snow White’s stepmother’s caramel apples? Recipe for Murder: Frighfully Good Food Inspired by Fiction by culinary journalist Estérelle Payany appears to be full of good ideas for macabre entertaining.

Similar in concept to Alice Eats Wonderland published earlier this year, this is a cookbook for those who like their recipes fully contextualized:

Thirty-two great hero-villains of literature lure the reader into the kitchen to sample their signature recipes. Estérelle Payany shares to-die-for recipes inspired by scoundrels from popular literature. Each chapter opens with an excerpt from the original story and quirky illustrations by Jean-François Martin featuring the criminal and his recipe.

More sneak-peeks of the fabulous illustrations can be viewed on the blog Brain Pickings, though unfortunately there is no glimpse of the Queen of Hearts who, we are told, has contributed her recipe for treacle tarts.

Recipe for Murder is published by Flammarion and is selling on Amazon for $17.96 (hardback).