Fashion is a weak suit at Let “Universe” Be “Books”, but since Disney declared Alice is the New Black at a Las Vegas trade show back in September, Alice, and the prospect of tie-in merchandise, have been inspiring a number of fashion creations probably worth mentioning.

The Los Angeles Times reviewed the playing field on December 6th, name checking designers such as Donatella Versace, Jason Wu, and Antonio Marras, one of whom I have heard of. Mr Tom Binns is also making jewelery around the theme of absolutely smashing tea parties (New York Times photograph below). 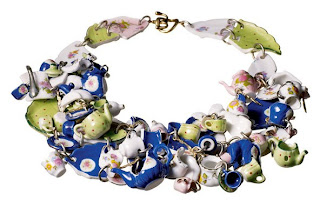 Then there’s Swarovski (pictured at top), always hot on Disney’s trail; Fashion Times warns us what is to come in the 2010 Spring-Summer collection:

Donuts? Anyway.
The cosmetics brand Urban Decay is coming out with a pop-up make-up box that Lewis Carroll would have been proud of, though he may have been less into the idea of little girls wearing eyeshadow with names like “muchness” (green) and “curiouser” (purple). (Thanks go to Diana Ajih from the blog Hot Beauty Health for locating sneak preview pictures.) 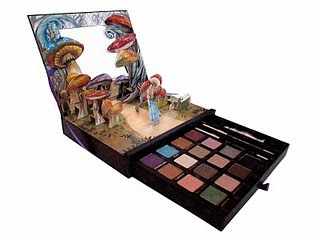 Vogue magazine’s naturally prophetic 2003 Alice-themed photoshoot, in which “the world’s most influential designers dress[ed] the original little girl lost in their own visions”, is back for viewing in the blogosphere, while the French department store Printemps has announced that the world’s most controversial designers will be dressing their store windows in one-off designs in time for Paris Fashion Week in February.
And for those who need that little blue dress now, Entertainment Weekly provided a short guide to “getting the look” of Syfy’s Alice.
Finally, Rock ‘n Roll Bride, “a little haven of kick ass weddingness in the overly poofy, pastel and often puke-worthy wedding world” posts Alice in her Wonderland, a photoshoot vision of a wedding with a difference (clue: the bride gets to eat the cake and the groom is nowhere to be seen).
Enough of fashion!