Hey, kid-
Wouldn’t you like to be on Broadway?
And wear some Bergdorf Goodman clothes?
Red alligator shoes, a golden anklet,
And seventeen dozen nylon hose,
Hey, kid! 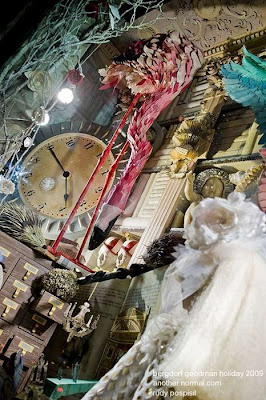 Alice’s New Musical Adventure won’t be coming to Broadway for awhile (it’s still playing counties), but she’s on 5th Avenue in Bergdorf Goodman’s Christmas window display. From the New York Times’ article with a Carroll reference in the title:

Bergdorf Goodman’s windows beckon with a swanky sparkle. “Alice in Wonderland” is the loose inspiration, and some fancy clothes play a role, but exquisite handicraft is the star of the show.

The shine comes from a vision in mirrors: A silver lobster plays a silver violin, beneath fluted columns with mosaic animal heads, under a disco ball surrounded by a Venetian frame — all reflecting the street scene, and all echoing a dramatic Pamella Roland gown swooping down from above.

Elsewhere, a king and queen, in black and red, sit on a chess board playing cards and drinking tea. But the chessboard is standing on edge against the back wall of the display, so the view is of the top of the monarchs’ heads — a neat optical trick that makes it seem as if you are peering down from above rather than walking by on the sidewalk. 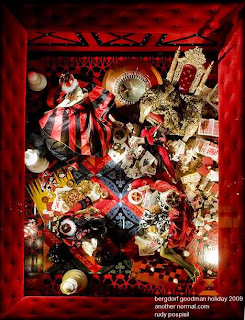 The true standout is a fantasia of white, built — literally and literarily — out of books. In a space covered top to bottom with whitewashed volumes, a dodo bird with feathers made out of pages hobbles near a turtle with a lamb’s head. A tea party spills out of the pages of an open tome like a tongue out of an open mouth. Delicate birds flutter out of another with origami pages. You could stare at it for an hour and only then notice the frog wearing a judicial wig.

“It’s everything you want from a window,” my friend said. “You basically want to feel like the Little Match Girl, with your nose pressed up against the glass. You want to be delivered from your drab existence in just the moment before you perish from the cold.”

Through the Looking Glass: Holiday Feasts for the Eyes
by Ariel Kaminer
The New York Times, December 4th, 2009
The Times website also has a slideshow with Ms. Kaminer narrating over the various New York City window displays, including Bergdorf Goodman, look for “Audio Slideshow” when you go to the full article. Thanks to Jenny Woolf for finally finding pictures of the storefront at trendhunter.com.