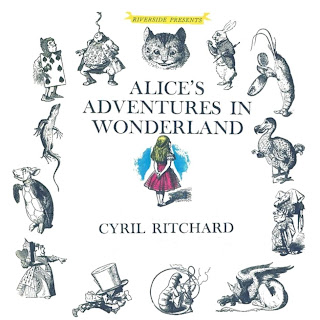 In 1957, a popular dramatized LP version of Alice’s Adventure’s in Wonderland was released, narrated and sung by Cyril Ritchard. It’s still widely available, even on iTunes here. The music, which many children of that generation heard so many times, was written by light classical American composer Alec Wilder – (He also wrote television operas, like Miss Chicken Little [1953] for CBS, and was friends with Frank Sinatra and Tony Bennett.) A piano reduction of this score, with song versions of just about every poem in AAIW, has been in print from Tro Ludlow Music since 1986. However, the original instrumental score, for woodwind quintet plus percussion, was lost.

It was lost until it was found in Gunther Schuller’s attic a few years ago. (Schuller is another swing-era American popular-classical composer.) Professor John Koehn will be staging a performance at Indiana University of Pennsylvania’s College of Fine Arts this weekend and next, with the school’s Dean, Michael Hood, reading from the story. 11am on Saturday, December 12th and 19th, at the Indiana Free Library in Indiana, Pennsylvania. Read more about it in the Indiana Gazette.