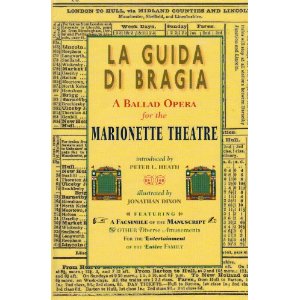 Lewis Carroll came from a large family, and got his start in children’s entertainment and storytelling by writing for and staging plays with his siblings. One surviving example is the puppet play La Guida di Bragia, dating from the early 1850’s. The LCSNA published the text in 2007 with illustrations by Jonathan Dixon – available here for $25. Dixon also spoke at the LCSNA’s Spring 2009 meeting in Santa Fe, followed by a marionette performance staged by Theaterwork’s artistic director David Olson. Good Times! “Together with LCSNA’s multi-talented Jonathan Dixon, Olson talked about the marionette play we would see in the evening:  how children’s dolls, rescued from the local Goodwill  store, were turned into doll puppets  representing the characters of Mooney, Spooney, Sophonisba, and her husband Orlando.” Here’s a photo: 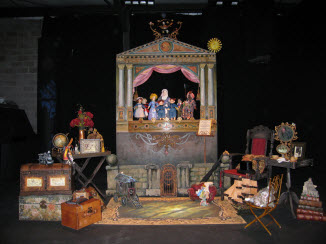 This year, more American puppeteers have tackled La Guida di Bragia. Diane Lewis, who works at the Theatre Arts Department at Saddleback College in Mission Viejo, California, collaborated with her students to create marionettes for the play, and they have been featured in the Summer 2012 edition of Art Doll Quarterly. The article “Characters Behind the Curtain: Instructor Offers History along with the Magic of the Puppet,” by Mozelle Sukut, included “several large illustrations, and descriptions of Lewis’ techniques, philosophy, research, teaching methods, etc.” (reports Mark Richards of the UK Lewis Carroll Society.) The show was never produced, but the marionettes are very charming.