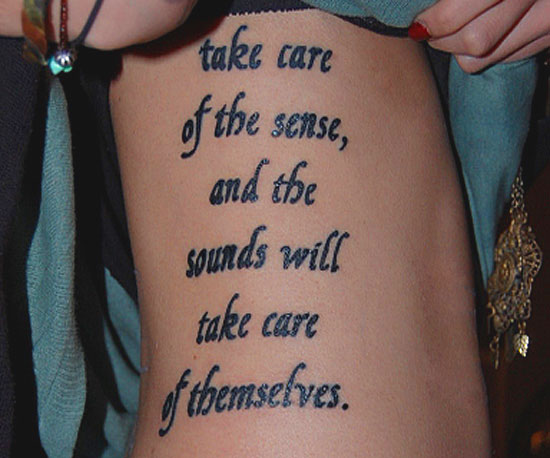 The Publisher’s Weekly blog PWxyz ranked The 5 Books that Inspire the Most Tattoos, finding Alice’s Adventures in Wonderland in the top 5. Their online research seems to be thorough, even if the methods aren’t scientific: “We spent an untold number of hours combing the Internet’s two most extensive literary tattoo sites: Contrariwise: Literary Tattoos and The Word Made Flesh, then cross-checking the most frequently occurring tattoos with Google searches and Google image searches, all to get to the bottom of what books inspire the most tattoos and why.” Lewis Carroll’s book was beat out only by… Slaughterhouse Five by Kurt Vonnegut, only because of the popularity of the phrase “So it goes.” So it goes.

Alice has inspired the most varied collection of tattoos of any book. Its wide cast of characters, quotes and images are all represented: the Cheshire Cat, the Dodo, the White Rabbit, and the Caterpillar all have fans out there. Out of the quotes, “We’re all mad here” was the most commonly occurring. Credit Alice‘s popularity among the tattooed to the fully-realized world Carroll created, and for tone specific to its story. More than any other book on this list, you’d be likely to get an Alice tattoo because it simply looks great and is hyper-intricate. Tim, who has an image of the Cheshire Cat on his shoulder blade, said on Contrariwise: “The Cheshire Cat is the only creature in Wonderland who uses logic. Though his words often seem mocking and bizarre, his process is always logical. To me the Cheshire Cat symbolizes the fragility of the border between genius and insanity.”