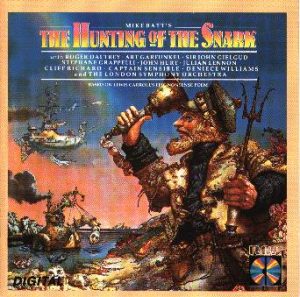 Give us an overview of The Hunting Of The Snark album.

I made this album in the early eighties, – purely on a whim, and having fallen in love with Lewis Carroll’s nonsense poem. I wrote all new lyrics (and utilized his poem as narration between the songs). It’s a mad story of 10 characters who all go off looking for the SNARK, whatever it is, – and it is whatever you want it to be. Some might see it as money, some as religion, some as love, some as just a beast of flesh and blood. That’s what the album and subsequent stage show explore – the different points of view many people can take about the same thing. I made the album using the London Symphony Orchestra, and a great cast of stars, from Art Garfunkel to Roger Daltrey, Deniece Williams and even a cameo from George Harrison. It was a fantastic experience.

Why put it out now?

It’s never been out in the States – and in fact never had a full release in the UK either, way back, because of a dispute with the record company. I’ve now reacquired it and am issuing it on my own label, Dramatico. I think it is among my best work as a writer, arranger and orchestrator – and it would be a pity for it never to have seen the light of day.

Any favorite memories or interesting stories from the theatrical performance?

We played some fun concerts of it in Australia, – and also in the UK. Costumed concerts with the whole orchestra dressed up in nautical outfits, and the cast working in front of them, oratorio style. Then it progressed to the West End, like a full “Broadway” production. We had a 50 piece orchestra live on stage every night – so consequently we couldn’t afford to keep it on for long (7 weeks) but it was a hugely rewarding experience. We did things like plant dancers in the orchestra and so suddenly the cello section would start doing backflips, – we even had someone “fish” a viola player out of the orchestra from a bridge, above, using a fishing rod (and a flying harness!). It was totally insane.

Tell us how you went about putting the album together from a songwriting perspective.

I literally scored it straight onto full orchestral manuscript, starting with an empty page and working from front to end. It was before the days of Finale and Sibelius, so the good old 2B pencil and eraser were my tools. I had 3 months in which to write it, having given myself that deadline in order to perform it at an LSO concert I had been invited to conduct. I allowed myself a lot of freedom, but didn’t steal any lyrics from Lewis Carroll. I do, as I said earlier – quote him verbatim, as verse between the songs. I wanted to write something that was intriguing, originaland commercial. I think the fact that I was brought up on The Beatles has something to do with both my choice of subject matter and the whimsical quality of the songs.

Among all the projects you’ve worked on, what are some of your personal favorites? Which ones do people say moved them the most?

Snark is right up there as one of my favorites. [continue reading the interview…]