The Royal Winnipeg Ballet has just finished their premiere run of a new “Wonderland” choreographed by Shawn Hounsell at Winnipeg’s Centennial Concert Hall. It was there till March 13th, but it will now begin a worldwide tour of Canada, ending at Ottawa’s National Arts Centre, April 28th to 30th. Paula Citron’s dance review in The Globe and Mail has a nice headline: The story wanders, but ‘Wonderland’ looks wonderful. Was she expecting a linear plot in a ballet adaption of Lewis Carroll? Here’s Citron’s critique: 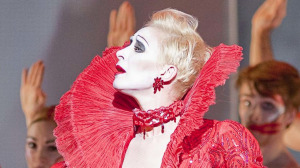 …The Royal Winnipeg Ballet’s new production of Wonderland, however, is both ambitious and flawed – the work is a technical triumph, but it falters in content. Montreal-based choreographer Shawn Hounsell has approached Alice from two sides. On one, the book’s favourite characters are given their rightful place on the stage, which provides both whimsy and humour. (There are also a couple of surprise cameo appearances.)

On the darker side, Hounsell has made Alice (Jacelyn Lobay) an older woman who is looking back through the rabbit hole at her dreamlike journey. That fantasy allows her to escape the mundane, but at the end of a second visit comes the reality check: Alice, and humankind in general, cannot escape into fantasy forever.

Hounsell’s problem is that, while he has fashioned Carroll’s famous characters with some skill, he has not really been able to portray the more serious parts of his vision. There is rather a disjointed quality to the choreography, and the voiceover text, while helpful, does not completely fill in the gaps. [Continue reading here.]

I wonder if adapters will ever tire of the older-Alices-returning motif, or if it’s chronically perennial? Here’s a little more of her review:

Beloved ballerina Tara Birtwhistle, looking like a 1980s Lady Gaga [What? -Ed.] with platinum hair, bright red bell bottoms and an Elizabethan collar, is a harridan of a Queen of Hearts. Using her megaphone, she shouts a stream of insults and orders, and of course her trademark “Off with their heads!” In my favourite line, she chastises the orchestra for playing too many notes. 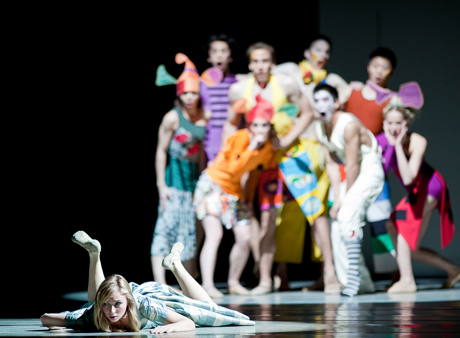 And RWB has a series of videos about their Wonderland:

A Year In Wonderland | Episode 1 – Part 1 from Canada’s Royal Winnipeg Ballet on Vimeo.

2 thoughts on “The Royal Winnipeg Ballet in Wonderland”