LCSNA President Andrew Sellon gave an informal talk to an appreciative audience at St. Peter’s College in Jersey City, NJ on Wednesday, April 7th, about how he fell down the rabbit hole and ended up a Lewis Carroll fan for life. English Cl 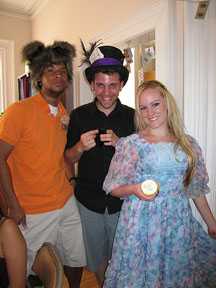 ub President Jonathan Brantley (pictured to the left wearing March Hare ears) had contacted Andrew via Facebook to invite him to attend their informal “tea party symposium” as keynote speaker. Some attendees even dressed up for the occasion. After his talk, Andrew led a lively discussion about the recent Tim Burton film and other adaptations. Jonathan also presented an excellent paper giving an overview of the creation of the two Alice books and their continuing impact on our culture today. There was an ample buffet of Carrollian treats, and no one at the table was forced to “move down! move down!” All in all, a brillig event. (More photos can be seen on Facebook here.)