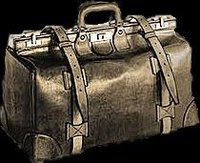 Lewis Carroll was not mentioned by name, nor was the word ‘portmanteau’ ever dropped, but Humpty Dumpty’s spirit lurked around the September 13th, 2009, episode of This American Life (#389 Frenemies). Starting at 29:45 in the episode, Ira Glass interviews lexicographer Erin McKean, whom he had asked to research the word ‘frenemy’. She found the first attempted coinage by gossip columnist Walter Winchell in 1953, who wrote “how’s about calling the Russians our ‘frenemies’?”, although the word didn’t really take off till decades later.

Their conversation, transcribed, starting at 32:00 in the episode:

Glass: Wait, are there other words like this, where they sound alike, and then they get smashed together into one word?
McKean: Oh, it happens, like, all the time. I mean, think, there’s, like ‘guesstimate’, right? And that’s from 1936.
Glass: Do you have another one?
McKean: I love this one, and people say this one all the time with a little thrill of thinking they’re the first person ever to say it: You know, that someone is entering their ‘anecdotage.’
Glass: I’ve never heard that. So you get old, and then you start telling your anecdotes, and that’s it?
McKean: Right, and I think the central part, is that you start telling the same anecdotes over and over again.
Glass: Right. You got another one?
McKean: Lots of people think that they are the first person to create the word ‘linner’.
Glass: Linner?
McKean: Linner is that meal you must have between lunch and dinner.
Glass: That just makes me feel mad at somebody, hearing that…

(They go on to discuss the word ‘slanguage’ and lexical gaps.) The lexicographer and the radio host condescend a bit to these enthusiastic amateur wordsmiths, but they’re far from being the first people to think they’ve coined a clever portmanteau. Mark Burstein quotes from James Atherton’s The Books at the Wake, when he discusses the creation and later development of word-smashing techniques from Carroll to Finnegans Wake:

It must have astonished [James] Joyce, that avant-garde innovator, proud of his Irish nationality, contemptuous of the Church of England, and confident of his own originality, to find that he had been forestalled in so many of his discoveries by a mid-Victorian Englishman in minor Anglican orders.

Of course, Humpty Dumpty doesn’t claim to have invented the practice, nor any of the portmanteaus of which he is the master. And back to Ira Glass, it’s a shame they didn’t get into the history of “smashing together” words, but it’s interesting to learn that part of a lexicographer’s job is to let people down when they learn they didn’t invent words like ‘anecdotage’.