A bandersnatch was in the news today, but it was widely assumed to be a typo. The actor who plays the titular role in BBC One’s Sherlock, Benedict Cumberbatch, had his already-Carrollian-sounding name apparently spectacularly autocorrected by the Washington Post into “Bandersnatch Cummerbund.” Thanks to @Alex_Ogle on Twitter for the picture before. Anyone hoping for a sober correction – something along the lines of “The Washington Post deeply regrets mistakenly printing the name of the actor Benedict Cumberbatch as Bandersnatch Cummerbund blah blah blah” – will be disappointed. The Post responded that it was not a typographical error, and issued the following statement:

UPDATE: It has come to our attention that there is raging debate, in re whether we intentionally referred to Benedict Cumberbatch as Bandersnatch Cummerbund in The TV Column and blog.

Apparently it all started when Poynter posted an item early Tuesday afternoon about the “typo.”

MSNBC.com’s Alex Johnson, a gentleman and a scholar (and former Post staffer), leapt to our defense, noting I correctly identified Cumberbatch on first reference in the column item, and explaining that we are “a titan of snark” who “gets away with that kind of stuff all the time.”

Johnson was perhaps recalling the time, back in 2009, when Politico wrote about the sorry state of The Washington Post’s copy editing, citing something we had written about “American Idol” in which host Ryan Seacrest was called “Seabiscuit” – until some people explained to the author in the comments section, that we had used the nickname for Seacrest during many years of “American Idol” recapping. (The report vanished from the Web site).

But Poynter’s Craig Silverman, a skeptic, bet Johnson a beer on it, asking Johnson, like he meant it to sting, did he think the Post’s copy desk would let that through without any kind of wink to readers.

But, we would like to give credit where credit is due. The nickname “Bandersnatch Cummerbund” originated with one of the serious students of television who join me each Friday to chat about all things TV. And that person would no doubt want to give credit to Lewis Carroll, who first wrote about the “frumious Bandersnatch,” in “Jabberwocky,” in the late 1800’s. We loved it then, we love it now. Oh — and, wink wink!

Call to artists to represent the Tulgey Wood monster wearing a tuxedo sash. 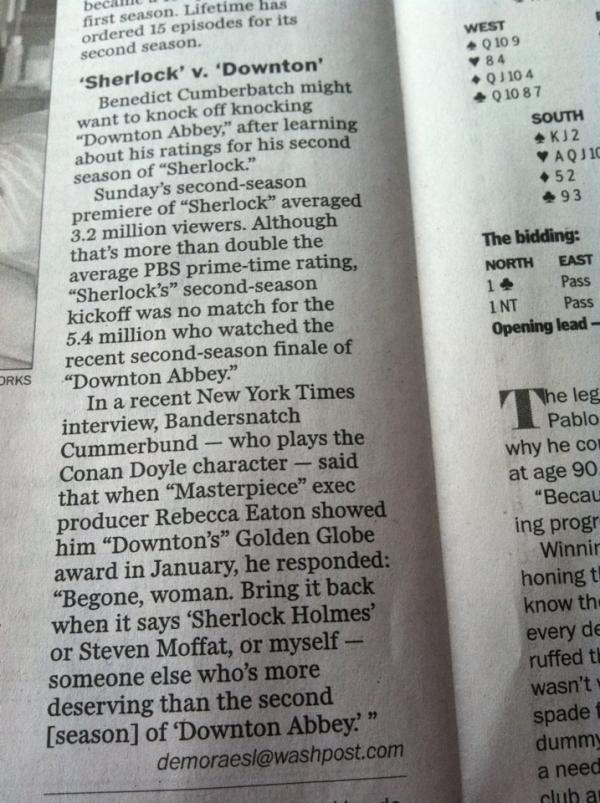