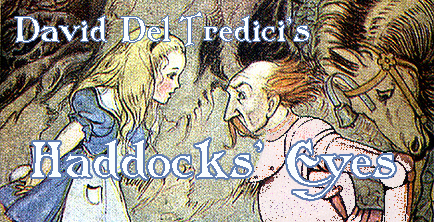 The composer’s 75th un-Unbirthday was actually last March 16th, but it was celebrated in style on March 25 and 26, according to Operation Brooklyn, with a performance of “Haddocks’ Eyes” at the Galapagos Art Space in Brooklyn, starring Amy van Roekel and with Del Tredici playing piano. The show was presented by Opera on Tap (“born as a barroom presenter of arias” according to the Times,) and American Opera Projects.

Is the White Knight, who sings Alice his famous nonsense song in “Through the Looking-Glass,” really a caricature of Lewis Carroll himself? Like the knight, Carroll had shaggy hair, mild blue eyes, a kind and gentle face. Like the knight, his mind seemed to function best when it saw things in topsy-turvy fashion. . . Of all the characters Alice meets on her two dream adventures, only the White Knight seems to be genuinely fond of her and to offer her special assistance… His melancholy farewell may be Carroll’s farewell to Alice when she grew up (became a queen) and abandoned him. With this idea in hand, David Del Tredici’s uses his post-Romantic musical style to bring a touchingly personal dimension to the Alice universe. “Haddocks’ Eyes” was commissioned by the Chamber Music Society of Lincoln Center and premiered at Alice Tully Hall in 1986.

Then there were other “Alician” pieces on offer, described by the New York Times:

The programs veer off into very different territory with “Through the Peeping Glass,” described as a “burlesque/cirque” performance by the burlesque artist Rita MenWeep. Sunday’s show includes excerpts from the opera “Dreaming of Wonderland” by Manly Romero and on Monday with portions of Susan Botti’s opera “Wonderglass.”

That’s apparently not the first time Rita MenWeep has done Carrollian Burlesque at the Galapagos Art Space. We found this youtube featuring MenWeep from the gallarey’s Alice in Wonderland-themed 2010 Spring Ball, called “Dances of Vice.”