Nancy Willard sends Clare Imholtz  this piece of snail-mail correspondence as a ‘guest blog,’ a report of a local production of Alice in Wonderland witnessed in Provincetown, Mass. 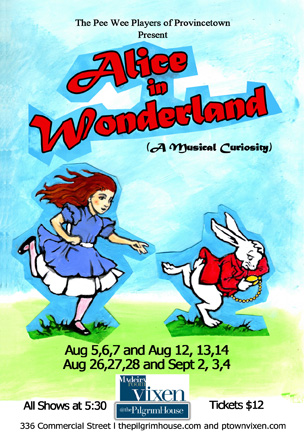 August 6, 2011
I am writing from Cape Cod. Lewis Carroll is thriving here. Two productions of Alice are listed in the local newspaper, and yesterday I attended one of them, in Provincetown. When I told the director that I would be writing to the Lewis Carroll Society about it, he was ecstatic. Needless to say, the production was an adaptation, a wonderfully zany and lively affair, and I think the ingenuity the actors showed in staging “The Pool of Tears” and “The Garden of Live Flowers” in a small space would have amused Carroll. The director told me that the aim of their theater was to put on plays that would be greatly enjoyed by both adults and children.

The play, Alice in Wonderland (A Musical Curiosity), was performed by the Pee Wee Players of Provincetown. It was adapted by Matthew Lazure with additional songs by Ryan Landry, and directed by Marc Guerrette. The players were Matthew Lazure, Marc Guerrette, Megan Ludlow, Billy Hough, and James P. Byrne.

It runs weekend evenings at 5:30pm through September 4th, in the Vixen at the Pilgrim House, Provincetown, Mass. Thank you, Nancy!