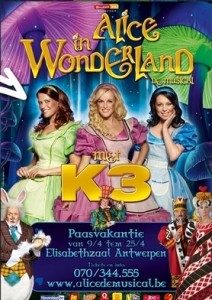 The Belgian Pop trio K3 will be starring in “Alice in Wonderland le Musical” in Antwerp, April 9th through 25th, 2011. I can’t embed the promo videos, but I highly recommend them – link here.

K3 appear to all be playing Alice, but in three different colors. Here’s a google-translated description (from the Dutch) of the show:

Karen, Kristel and Josje bored and the three of us going to the movies. Once at the cinema arrived, they end up in the story of Alice in Wonderland. They decide to go Alice warn all that lies ahead, but they are all too late. Their search for Alice is full of surprises and nothing is what it seems. […]

‘Alice in Wonderland’ takes you on a magical adventure in a magical world of fantasy. Are you going to Karen, Kristel and Josje last?

3D World first:
In the musical “Alice in Wonderland ‘for the first time in a musical world use 3D sceneries. The same technique is used to show 3D movies in the cinema.

Visitors of the musical will get a pair of glasses for the 3D effects to be observed. The public has the ultimate experience to sit in the middle of the story and together with K3 to adventure in the wonderland of Alice in Wonderland.

The musical promises to be a unique total experience with a live orchestra, spectacular 3D scenery and breathtaking costumes.
The story of the musical is based on the famous, written by Lewis Caroll, story ‘Alice’s Adventures in Wonderland “(1865) and its sequel” Behind the Looking Glass and what Alice found there “(1871).

I thought live theater was in 3D already?

UPDATE: Thank you Europopped for e-mailing us that K3 has already released an Alice-themed video this year!