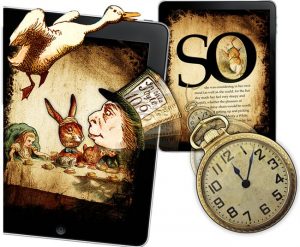 There’s an article by Alice Rawsthorn in the Nov. 28th New York Times to complain about how “boring” the design for most of the new apps for the iPad have been: “On an Innovative Device, Apps Lacking Imagination.”

However! Atomic Antelope’s beautiful and creative Alice’s Adventure’s in Wonderland popup e-book is singled out as one of her “honorable exceptions,” along with a few magazine apps like The New Yorker and Wired.

As for books, children’s titles are leading the way with apps that include animated illustrations, often activated by the reader. My favorites are the fabulously surreal ones in “Alice for the iPad,” Atomic Antelope’s interactive version of Lewis Carroll’s “Alice in Wonderland,” and Oceanhouse Media’s “Dr. Seuss” apps. Kids can “play” the Dr. Seuss stories like movies — saving you from reading the same one again and again. Each word is highlighted when it is spoken on the soundtrack.

There has been less experimentation for grown-ups. Though the British publishing house Fourth Estate has produced an intriguing app based on the mathematician Marcus du Sautoy’s book “The Num8er My5teries.” Rather than replicate the book, it complements it by enabling the reader to participate in animated mathematical puzzles featuring a cartoon version of Mr. Sautoy.