The New York Times today is running an obituary under the sing-songy heading “Leigh Van Valen, Evolution Revolutionary, Dies at 76.” 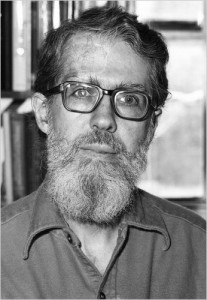 The evolutionary biologist Leigh Van Valen’s eccentricities were legend far beyond the University of Chicago, where brilliant and idiosyncratic professors rule. He named 20 fossil mammals he had discovered after characters in J. R. R. Tolkien’s fiction, and his most famous hypothesis — among the most cited in the literature of evolution — was named for the Red Queen in Lewis Carroll’s “Through the Looking Glass.”

Dr. Van Valen’s metaphor to describe this idea came from the Red Queen in Carroll’s “Looking Glass.” In the book, Alice complains that she is exhausted from running, only to find she is still under the tree where she started.

The Red Queen answers: “Now, here, you see, it takes all the running you can do to keep in the same place. If you want to get somewhere else, you must run at least twice as fast as that.”

Read the article (including the explanation of the theory, which I ellipsed out of the excerpt) here.