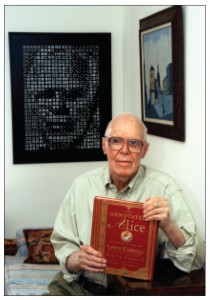 With great sadness we note the passing of Martin Gardner this past Saturday, May 22, 2010, in Norman, Oklahoma at the age of 95.  Martin Gardner was not only a founding member of the Lewis Carroll Society of North America but also, it is surely safe to say, the founder of serious Carroll studies through the publication of his book The Annotated Alice. That work, which went through three editions (The Annotated Alice, 1960; More Annotated Alice, 1990, and The Annotated Alice: The Definitive Edition, 2000) introduced countless numbers of people to Lewis Carroll’s Alice, thereby bringing Carroll’s works to the popular mind as never before.  His Annotated Alice also set the standard, one seldom equalled, for a numerous succession of annotated works by other authors.  In 1962 he published his Annotated Hunting of the Snark, reprinted in 2006 in an expanded, definitive edition with a brilliant introduction and appreciation by Adam Gopnik.

Like Lewis Carroll, Martin Gardner had a deep appreciation for serious and recreational mathematics [he wrote the famous “Mathematical Games” column in Scientific American for 25 years with more than a few touching on Carroll], a love of language and paradox, and a profound interest in religion.  Like Houdini, he was keen on magic tricks and equally intolerant of paranormalists and other charlatans.

Martin was always willing to help those who corresponded with him and, although some of us never had the privilege of meeting him, we all knew him and counted him both a learned guide and an always generous friend.