And the winner of the 2009 Elizabeth Mrazik-Cleaver Award is… 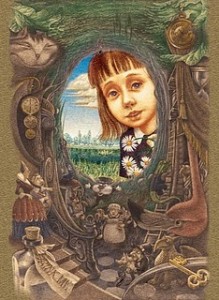 “…Oleg Lipchenko has turned this classic story into a rich expression for both the youngest reader greeting Alice for the first time and those who remember reading the original Alice as children…Lipchenko’s illustrations are more than images on a page, they are a homage to the surreality and humour of Carroll’s text as well as a meticulously and brilliantly constructed vision of a longstanding tradition in children’s literature.” – Jury’s comments

The prize is awarded by the International Board on Books for Young People (IBBY):

THE ELIZABETH Mrazik-Cleaver Award was established in 1985 following the death of Elizabeth Mrazik-Cleaver, one of Canada’s pre-eminent book illustrators. In her will, Cleaver left a fund of $10,000 dollars for an award to be given annually in recognition of outstanding artistic talent in a Canadian picture book. The recipient receives a cheque for $1,000 dollars and a certificate.

The Cleaver Award is administered by a committee of three members of the Canadian section of the International Board on Books for Young People. The recipient is a Canadian illustrator of a picture book published in Canada in English or French during the previous calendar year. To be eligible, the book must be a first edition and contain original illustrations. All genres are considered: fiction, non-fiction, poetry, folk and fairy tales.

This is the first time an edition of work by Lewis Carroll has won the prize.

In addition to Alice’s Adventures in Wonderland, Oleg has illustrated Humpty Dumpty and Others: Selected Nursery Rhymes and a number of Russian children’s tales. Many of these illustrations can be viewed on his website.

2 thoughts on “Good News for Alice and Oleg”