Strange creepy creatures come out of your dens, and go to the world premier of The Hunting of the Snark at the Queens International Film Festival on Saturday, November 14th, 2009. The 30-minute student film is the directorial debut of Peter Pavlakis, a Brooklynite. The synopsis sounds like the plot sticks close to the Carroll poem, and the film trailer has an actor reading verbatim one of the rhymed speeches – so, we can expect a bit of fidelity, not a psycho-sexual re-imagining of the Bellman returning to sea a decade later to confront his nightmarish inner demons (ending in a car chase). 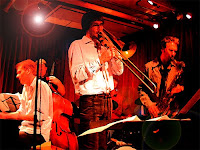 Also coming out this week with the same title, the transatlantic “cosmopolitan post-bop” group NYNDK released “The Hunting of the Snark” on the label Jazzheads. The album includes hip versions of Charles Ives, Edward Grieg, and Carl Nielsen. The titular track (which can be heard online here) begins with some snarky outgribations on trombone, but I couldn’t find any explanation for the use of the Carroll poem’s title beyond catchy inspiration.