Now available is this comprehensive bibliography of over 1,000 entries listing all known editions of Lewis Carroll’s Sylvie & Bruno books, their translations into foreign languages, excerpts from them, the appearance of their poems in anthologies, critical articles and studies, parodies, and much more. This book establishes for the first time the full bibliographic record of these long-neglected works by Carroll, including several little-known bibliographic rarities.

This descriptive bibliography will introduce many of its readers to the important techniques of the novels, with their multiple and shifting levels of reality, and the delightful nonsense of the Mad Gardener’s Song and other poems in the books. The bibliography includes a 30-page scholarly essay by Anne Clark Amor, one of Britain’s foremost Carroll scholars, as well as a complete list of the recipients of Lewis Carroll’s presentations of the two books, compiled by Carroll scholar Edward Wakeling.

In identifying the riches to be found in the bibliographic outlands of Carroll’s Sylvie & Bruno books, Sewell and Imholtz have demonstrated that there has been far greater interest in them than has generally been recognized. The bibliography reveals the many literary and cultural figures who have commented on, disparaged, imitated, parodied, quoted or in some other way drawn upon the Sylvie books, including: T.S. Eliot, Harold Bloom, Jorge Luis Borges, G.K. Chesterton, James Joyce, Ogden Nash, Elizabeth Sewell and Evelyn Waugh, among others. The extent and thoroughness of the bibliography is in no small part due to the wonderful cooperation the bibliographers received from collectors and scholars in Great Britain, Japan, Russia, Finland, France, the United States and elsewhere.

“The range and extent of the work is indeed impressive, and the volume is bound to become a cornerstone of Lewis Carroll scholarship. ” —Professor Morton Cohen

Available from Oak Knoll Press. 20% off to LCSNA members. www.oakknoll.com/detail.php?d_booknr=94203 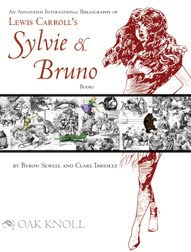