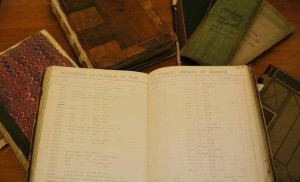 …So when I learned about What Middletown Read, a database that tracks the borrowing records of the Muncie Public Library between 1891 and 1902, I had some of the same feelings physicists probably have when new subatomic particles show up in their cloud chambers. Could you see how many times a particular book had been taken out? Could you find out when? And by whom? Yes, yes, and yes. You could also find out who those patrons were: their age, race, gender, occupation (and whether that made them blue or white collar, skilled, semi-skilled, or unskilled), and their names and how they signed them.

John Plotz at Slate.com explains the What Middletown Read database, the labor of Ball State University English Professor Frank Felsenstein. We at the LCSNA were naturally immediately curious about how often Lewis Carroll books were checked out, and the result is mysteriously bare: Alice’s Adventures in Wonderland, the only Carroll book that the Muncie Public Library owned, wasn’t acquired until 1900, and then only checked out ten times in an eight month period. Unless we’re missing something, that’s it. Perhaps it wasn’t popular in the midwest until later, or perhaps it was a common book in private collections therefore unnecessary in the public library? Or maybe the local pick-a-little-talk-a-littles thought it was a “dirty book,” like BALZAC. If anyone has any theories, please comment.