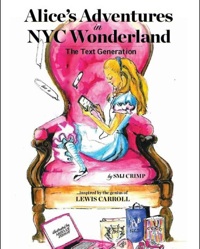 RU ready? New York author Susan Crimp has written an updated version of Alice’s Adventures entirely in text-speak. Alice’s Adventures in NYC: The text generation is available for Kindle from Amazon with plans for a print edition “soon.” In addition Crimp is working on two similar books, Through The NYC Looking Glass and Great Textpectations, to be published later this year.

In Crimp’s story, a descendant of Alice falls down a rabbit hole near the Alice statue in Central Park, has an adventure in Wonderland and then records the story on her cellphone in between classes, with help from her BF. The book includes a glossary (“offered 4 u in case u r lost 4 words”), and a cast of characters. Here’s an extract from the latter:

Ok, but is this modern + understandable language all that it seems? I’m suspicious that Crimp has taken a few liberties with text speak. The phrase “as opposed 2 long winded waffle” doesn’t seem particularly thumb-friendly, and why is the word “the” sometimes abbreviated and sometimes not? Excerpts from the book’s glossary, also available on Amazon, suggest either that the text messages of 7 year olds have reached Byzantine maturity, or else that Crimp has made some judicious additions to the stock vocabulary: are the teenagers of Manhattan really texting each other “OBE” (overcome by events), “AWGTHTGTTAG” (are we going to have to go through this again?) or, my favorite, “BHA” (bring him Advil)? I hope so, I’m just not sure.

Reviews of the book can be read on The Village Voice and  DNAinfo.com. Better still, we would love it if someone with a Kindle would buy the story (only $5.99!) and send us a review for this blog. We would be yr BFF.