There’s a new history of pen names out by Carmela Ciuraru (real name?) called Nom de Plume: A (Secret) History of Pseudonyms ($24.99). The story of Lewis Carroll’s name is apparently given prominent placement. Emily Fredrix of the Associated Press reports: 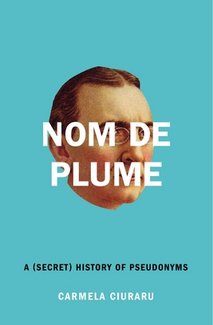 From Lewis Carroll (born Charles Dodgson), to Mark Twain (Samuel Clemens) and Victoria Lucas (Sylvia Plath), one chapter is devoted to each, with so much detail that the authors seem to become characters in Ciuraru’s book.

The names can be an excuse, reason or outlet to create. The Bronte sisters — Anne, Charlotte and Emily — wouldn’t have been taken seriously — or even printed. The male pen names of Acton, Currer and Ellis Bell gave them a chance to be published.

Others, like Carroll, author of “Alice’s Adventures in Wonderland,” were well-established in their fields and wanted a pen name to separate their various selves.