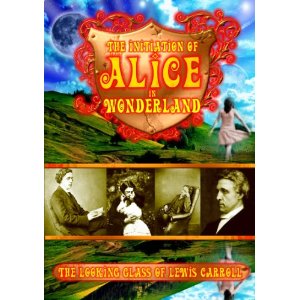 This has been out for a year, but it’s the first time it came across our desk. The LCSNA member who forwarded it to us suspected that it was “execrable.” It’s a 2009 low budget documentary called Initiation of Alice in Wonderland: The Looking Glass of Lewis Carroll ($24.95) directed by Not Provided and starring Artist Not Provided. (Personally, I prefer their earlier work.) I would never judge harshly without seeing it, but luckily there are some Amazon.com customer reviews which have done that for me, with some disturbing facts about the movie’s mistakes:

“Worse than just a boring, repetitive ripoff off old biographies, this film ‘stars’ the director’s daughter mugging for the camera over and over. The director’s own bias towards the mystical warps Lewis Carroll into some chemical character. The most awful part here is the terribly Photoshopped picture of Lewis Carroll embracing and kissing Alice Liddell !? This is shown maybe 10 times throughout the film. If there is a Liddell or Dodgson estate extant, they should sue. ” -B. T Weddleton

“…it is filled with misinformation. For one example, every time the narrator discusses the family of Alice Liddell, a picture is shown of Carroll with the wife and children of George MacDonald, another Victorian author.” -Melody Green

Anyone else who has seen it, please leave your thoughts in the comments. And, since there’s no record of it on imdb or elsewhere, can anyone supply a name for the anonymous people responsible for this project?

One thought on “Possibly Lousy Documentary on the Market”