Caffeine Theatre and Chicago Opera Vanguard will be premiering Boojum! Nonsense, Truth, and Lewis Carroll on November 18th thru December 19th, 2010, at Chicago DCA’s Storefront Theater. (I understand the “Nonsense” and the “Lewis Carroll,” but will withhold judgment on the “Truth.”) Caffeine Theatre is hosting a nonsense poetry contest, the winners to be incorporated into the play! The guidelines, as posted by Emily Wong at Gapers Block: 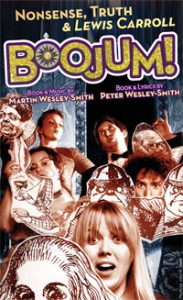 Caffeine Theatre wants YOU — to send them your original poetry for their “Old Father William’s Frabjous and Curious Poetry Contest.” Just follow their rules:

Submit your Lewis Carroll-inspired, nonsense poems by emailing the poems and a 3-5 sentence description of their relation to Lewis Carroll to the Caffeine Theatre Associate Artistic Director, Daniel Smith, at dan@caffeinetheatre.com. Make sure you have “Old Father William” in the subject heading! The deadline for submissions is October 31, 2010.

Meanwhile, while you’re waiting for Boojum!, Chicago’s Crown Point Community Theater is staging an adaptation of Alice in Wonderland, opening this Friday, October 8th. “It’s a very playful adaptation,” said director Liz Love according to the Post-Tribune. “The other characters are all getting ready to perform ‘Alice in Wonderland’ but they have a problem. They have no Alice. But as luck would have it there just happens to be a girl named Alice and they help her find her way into the story.”