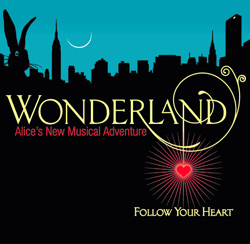 Back in November, Frank Wildhorn’s musical “Wonderland: A New Alice” premiered in Tampa Bay Florida. Yesterday it was announced that they are heading for Broadway and the big time. The show is set to open on April 17, 2011 and previews will begin a month before. The cast is yet to be announced.

“Journey with a modern-day Alice to Wonderland and the Looking-Glass World where she must find her daughter, defeat the Queen and learn to follow her heart…”

A synopsis, video montage, and musical clips from the 2009 production can still be enjoyed on this blog.