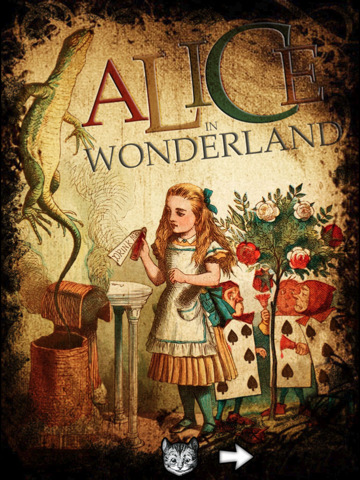 Alice fans and collectors tend to like real books – crisp, dusty, or yellowing, and preferably with pictures and conversations. Whilst reports of the death of print media have been greatly exaggerated, the iPad is the next big test of whether tablet technology can thrive in the mainstream, resurrect the glossy magazines, bring down the price and weight of textbooks, and broaden everyone’s access to rare books.

Even if digital readers sound horrible to you, it’s difficult to deny that this new Alice’s Adventures in Wonderland digital pop-up book for the iPad is fascinating. It looks like it successfully balances a functional reading experience with eye-popping fun. Is it any surprise the revolutionary app designers at Atomic Antelope chose Carroll’s story? (Look, their website has Tenniel illustations in its masthead!) This year has also seen the classic Alice tale tapped for the new 3D movie technology, but this is the actual Carroll text and Tenniel being used to demonstrate what a 21st Century digital interactive children’s book might start to look like.

There’s a sample version for free at the iStore and the full version sells for $9. Here’s the raving from the geeks at Gizmodo:

I keep twisting and turning my iPad with childlike wonder while reading the familiar tale of the adventures of a girl named Alice. For the first time in my life, I’m blown away by an interactive book design.

Alice for the iPad is a cute app which contains a slightly interactive version of a beloved story. It’s not interactive to the point of annoyance and tackiness, but instead full of clever little touches like mushrooms that you can toss around a room with a twist of your iPad or an Alice who grows and shrinks as you move your gadget around.

[…] And while it doesn’t seem to be intended for adults, I couldn’t be more fascinated by it. It’s quite possible the cleverest book I’ve seen so far and exactly how I dreamed books would look one day.

One thought on “Through the LED screen”