Alice needs your help! The the type of help, however, varies from game to game. Help her fall down the rabbit hole! Help her avoid death by playing cards! Help her wait tables in a poorly-managed Wonderland cafe! These are some of the many choices available in recent games for your Mac, PC, or iPhone. 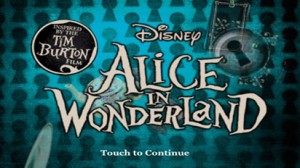 First up is the inevitable Disney/Tim Burton spin-off game, available for iPhone/iPod Touch, Wii™ and DS™ systems.  “Alice in Wonderland – An Adventure Beyond the Mirror” is a 2D platform puzzle in which players are invited to “explore a world filled with whimsical settings, optical illusions, challenging puzzles, and formidable adversaries.” According to reviewers it is ok:

“Alice in Wonderland makes a very good candidate for the videogame treatment. After all, she discovered how to shrink and grow large a century before Mario ate his first mushroom, and the Lewis Carroll stories are filled with memorable allies and enemies. … a puzzle game, with some clunky and imperfect platforming between puzzles…We were surprised that Alice in Wonderland contains some genuinely clever puzzles and Hollywood production values.” Andrew Podolsky, Slide To Play

Whether Alice is searching for points or hard cash, Wonderland seems to have discovered wage society. Take “Alice’s Teacup Madness,” available for Mac and PC; in this game Alice has to earn her way out of Wonderland by serving tea and pastries to difficult customers. Suddenly the question of who stole the tarts becomes one of petty larceny and it’s Alice’s job on the line.

Despite the excitement, reviews have been a little lukewarm:

“A lackluster presentation … not worth recommending except to the most die-hard of time management game fans… While the comic strips at the beginning of each location are cute, the characters who actually visit your cafe during a level remain one-dimensional and do not differ notably in tipping habits, patience levels or other behaviour.” David Becker, Gamzebo

“Alice Free Fall” is an iPhone/iPod download in which players guide a tumbling Alice to collect points in the form of roses and avoid death in the form of collision with playing cards. It has recently been updated and improved and the developers are promising new levels, new magical items and better visuals. If you have dismissed it in the past it might be worth another look.

And finally, we can’t omit the iPhone app “Alice’s Adventures: Rabbit Hole of Death.” As far as I can tell it takes the same basic premise as “Alice Free Fall” – “help Alice fall down a hole,” but this time Alice has been to see those nice plastic surgeons and invested in some fishnet stockings. One reviewer described it as your basic “move the limbs to fit through body-shaped holes” game. Basically, players must contort nubile Alice, as she falls through space, in order to prevent her colliding with pots of marmalade etc. Charles Dodgson please look away now.

I am sure there are many more out there. Additions and reviews below please!