It’s now only two weeks from opening night of the Tim Burton Disney 3D Spectacular. There’s posters all over bus stops in the East Bay Area, California. The LCSNA is preparing for the plunge (in lieu of the macropsiacal interest in Carroll) by revamping its website, which will integrate this blog (that’s right, we’re moving! so watch for a White Rabbit), all of this pretty soon.
The Winter 2009 edition of the Knight Letter (no. 83) featured an article by Daniel Singer called “Off With Their Heads! Those Awful Alice Movies.” (The Knight Letter is the LCSNA’s magazine, sent to subscribers for the membership fee of $35.) Of course, this theme is being taken up now all over, retrospectives of the century-plus of mediocre Alice in Wonderland movies. Susan King at the Los Angeles Times blog Hero Complex took a stab at the topic, beginning her article: “The first known ‘Alice in Wonderland’ film … was made in 1903, just 68 years after Lewis Carroll first published his fantasy ‘Alice’s Adventures in Wonderland.’” Perhaps she’s onto advanced rabbithole mathematics, and that works in base 17 or something. We recommend the Daniel Singer article if you can dig up a Knight Letter. 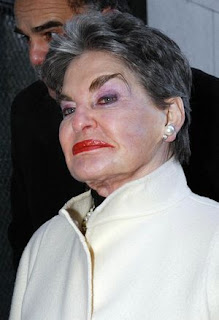 “In lots of illustrations and incarnations of Carroll’s work through the years, it always seems like she had a big head. It was an interesting challenge for us to find the right size and weight and proportions. One of the things we wanted to do was to use the actors and their performances — to use the real them — and then make them different. It’s still their performance but it’s just made weird. We wanted to achieve this blend. That was an important dynamic.”

“In a lot of children’s literature and other literature it’s kind of the same thing over and over — there’s good queens and bad queens, and here you have that but the elements are a bit blurred,” Burton said. “Everybody’s weird and has weird qualities to them. She’s kind of a mixture. When I look at her now, she reminds me of pictures I’ve seen of Leona Helmsley. There’s a tiny bit of elements of my mother in there too, for some strange reason. And Helena brings her own things to it too.”