A musician named Kristian Scheiblecker has written very pretty songs set to some of Lewis Carroll’s ‘non-nonsense’ poetry. I do not know if they are to be released for sale in any format, but you can listen to a thirteen-track playlist of them (some labeled ‘unfinished’), at his website journeys.se – which, even if it continues to evolve, already plays together nicely as an album. According to Jenny Woolf, he performed at the (UK) Lewis Carroll Society’s December party at the Art Workers Guild in London. She reports:

This year, a couple of Swedish guys called Kristian Scheiblecker and Pontus Nilsson came specially to perform some songs based on Carroll’s so-called “serious poems”. They have been classically trained but the music was more like early Leonard Cohen to my ear. You could certainly imagine Kristian sitting there in his Victorian cottage in Sweden and composing the music in the dark winter nights. 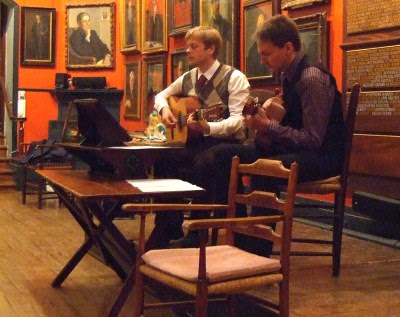 To my surprise I found that Carroll’s poems made terrific lyrics. Read purely as poetry, they are mostly rather banal. I was particularly impressed with “Only A Woman’s Hair” which makes a most touching ballad.

“…and, as I touch that lock, strange visions throng
Upon my soul with dreamy grace-
Of woman’s hair, the theme of poet’s song
In every time and place. –

A child’s bright tresses, by the breezes kissed
To sweet disorder as she flies,
Veiling, beneath a cloud of golden mist,
Flushed cheek and laughing eyes- –

Or fringing, like a shadow, raven-black,
The glory of a queen-like face-
Or from a gipsy’s sunny brow tossed back
In wild and wanton grace…

…The eyes that loved it once no longer wake:
So lay it by with reverent care-
Touching it tenderly for sorrow’s sake-
It is a woman’s hair.”

-quoted at length from jabberwock.co.uk/blog

Ms. Woolf compares his voice to Leonard Cohen, but it reminds me more of the Scottish Bard Robin Williamson, with fewer mordents. Scheibecker quotes Carroll scholar Edward Wakeling below the songs for an introduction to Carroll’s non-nonsense poetry: