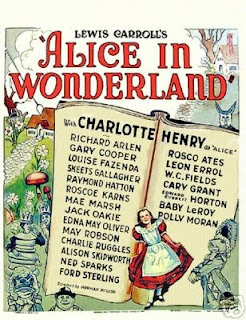 Do we have any readers in Vancouver? Near Vancouver? I don’t know, but if we do they should go to Vancity Theatre – the Vancouver International Film Center – on Sunday to see a rare screening of Norman Z. McLeod’s Alice in Wonderland from 1933. See Cary Grant as you have never seen him before – totally concealed inside a giant mock turtle suit!

“Extravagant all-star assaults on the work of Lewis Carroll – like the forthcoming Tim Burton-Johnny Depp movie – are nothing new, as this rare item from the vaults of Paramount Pictures goes to show. With a screenplay by Joseph L Mankiewicz (All About Eve) and designed by William Cam eron Menzies (Gone with the Wind), this has considerable pedigree even before you check out the cast list.

“But what a cast it is! WC Fields steals the show as Humpty Dumpty, but underneath splendid (if uncomfortable-looking) costumes you may also recognize the voices of Cary Grant as the mock turtle, Edward Everett Horton as the Mad Hatter, Gary Cooper is the White Knight, and Edna May Oliver as the Red Queen. Curiouser and curiouser, it has never been released on DVD or VHS.”