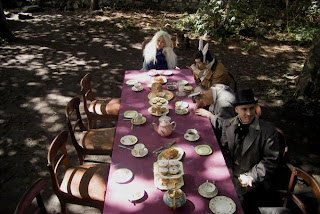 The Northern Gallery for Contemporary Art in Sunderland (U.K.) has a new exhibit, “A Gift to Those who Contemplate the Wonders of Cities and the Marvels of Travelling,” that includes an Alice-related film: “[Mio] Shirai’s new short film, ‘Forever Afternoon’, re-creates a section of Alice’s Adventures in Wonderland. …Shirai allows us to re-read Alice in a new way, as a parable of how we experience and assimilate alien cultures and places. Here, Alice – played by Shirai – has to learn the rules of engagement of a strange yet familiar place, rules which are logical, and yet different to our own. The film was shot entirely in locations which Carroll knew and visited in the North East.”