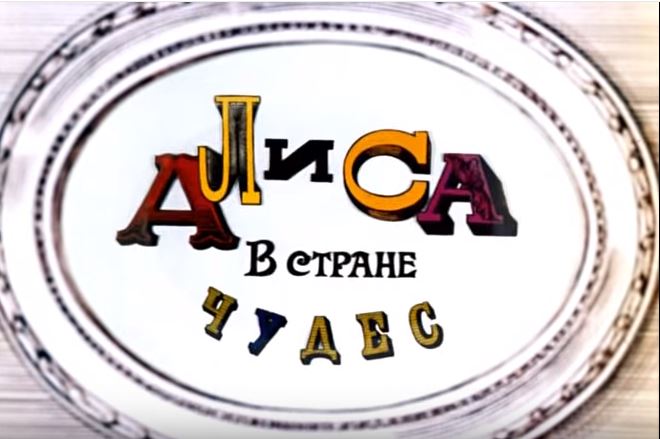 Lithuanian artist Natalie Shau (many of whose Alice-inspired illustrations can be found in her book Lost in Wonderland; a post about her is forthcoming) turned me on to this Russian-language animation of Wonderland, a series of three nine-minute episodes produced in the Soviet Union in 1981, by order of the USSR State Committee for Television and Radio, by the Kievnauchfilm Studio in Kiev. It was produced and directed by Yefrem Pruzhansky from a script by Yevgeny Zagdansky based on the translation by Nina Demurova, who consulted on the film. The music is by Vladimir Bystryakov, but some was, ah, borrowed from a few uncredited composers (e.g., Mozart, Respighi and Boccherini) and pop groups. Voice talents are by some of the USSR’s best actors; Alice was voiced by Marina Neyolova. The complete episodes can be found on YouTube: Part I, Part II, Part III. These are not subtitled or dubbed, but you can get a flavor of it in a subtitled Part I here. According to its Russian Wiki entry, it has been released on DVD several times.

The same studio and cast followed up with a four-part Looking-glass a year later: Part I, Part II, Part III, Part IV.